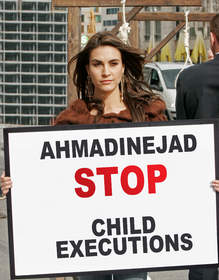 NEW YORK, NY, Sep 11, 2008  –  The President of Iran will have to get past the “Ahmadinejad Wall of Shame” — a visual display and demonstration across the United Nations Headquarters — before entering the opening of the General Assembly.
The rally will run from 12-2pm on September 23rd at Dag Hammarskjold Plaza (47th St. & 2nd Ave.) and feature Iranian/American groups each directly challenging Ahmadinejad on the surge in human rights abuses in Iran.
Organizing the event, Nazanin Afshin-Jam, an international human rights activist and former Miss World Canada, will lead off the line up of the “Wall of Shame” by asking: “Ahmadinejad why are you executing children?”
Nazanin’s actions on behalf of the children on death row in Iran began when she was told of a young girl on her namesake that was going to be executed for stabbing one of three men who attempted to rape her. Nazanin was instrumental in saving this girl and since then has been dedicated to saving more lives.
“There has been 6 children hanged this year alone in Iran and over 130 children on death row awaiting execution,” said Nazanin Afshin-Jam, President and co-founder of the Stop Child Executions (SCE) organization.
“While the UN legitimizes Ahmadinejad as the leader of Iran by having the door open to him at the General Assembly, the Iranian people feel betrayed by the false representation. In face of the west’s obsession with Iran’s nuclear development, the voices of the Iranian people have been stifled and human rights abuses have been overshadowed. This ‘Wall of Shame’ demonstration is hoping to give a ‘voice to the voiceless’ and address the concerns of the vast majority of Iranian people who believe in a united, secular, democratic Iran based on the Universal Declaration of Human Rights and no military intervention on Iran,” said Nazanin.
Groups and individuals participating in the “Wall of Shame” demonstration include those who have faced oppression under the current regime such as women under gender apartheid, students who have been imprisoned and tortured and ethnic and religious minorities who have been persecuted. Focus will also be given to other human rights atrocities in Iran including stoning to death, dismembering of limbs, and throwing people from heights as methods of punishment.
Nazanin states, “The government of Iran cannot on the one hand expect the international community to trust its leaders with nuclear energy while it openly disregards the most basic internationally recognized child rights conventions such as the UN’s International Covenant on Civil and Political Rights (ICCPR) and the Charter of the Rights of the Child (CRC) to which it is state party.”
Stop Child Executions invites all media and the general public to join this demonstration for Human Rights. SCE will release the latest list of minors facing the death penalty, and an 8 part plan of recommendations addressed to Iran’s heads of state, Parliament, Judiciary, United Nations and international community which will also be made available on the https://www.stopchildexecutions.com/ website following the rally.
For Further information or an interview with Nazanin Afshin-Jam please contact Leslie Taylor at Big Machine Media at 212-572-0760 or leslie@bigmachinemedia.com.
Stop Child Executions is the leading organization providing information and updates on the situation of minors on death row in Iran. It is a volunteer based, independent, non-political human rights group whose aim is to put a permanent end to child executions in Iran and abroad. https://www.stopchildexecutions.com/
Image Available: http://www2.marketwire.com/mw/frame_mw?attachid=833195

Join Nazanin Afshin-Jam at the UN headquarter in New York between 12-2pm on September 23rd at Dag Hammarskjold Plaza (47th St. & 2nd Ave.) and challenge Iran’s president Ahmadinejad on the human rights abuses in Iran. For more information about the rally visit: http://scenews.blog.com/3849157/

Get to know Nazanin :

We invite you to join a global initiative to end-once and for all-the practice of executing people for crimes committed as children. Today, although every country in the world is party to treaties prohibiting the death penalty for juvenile offenders, there are still five states-Iran, Saudi Arabia, Sudan, Pakistan, and Yemen-that continue to execute child offenders. Over the past three years, these five states* have executed 32 juvenile offenders, and have over 100 juvenile offenders still on death row.

A change in practice by these five states would result in universal adherence to the ban on juvenile executions. We invite NGOs -local, national, regional and international-to sign the petition calling for strong action by this year’s UN General Assembly to make the ban on juvenile executions a reality. Together, CRIN and Human Rights Watch will present these signatures to UN member states in mid-October, in advance of their debate on the rights of the child, to demonstrate the conviction of NGOs around the world that no one should ever be executed again for a crime committed as a child. We hope to have NGO signatures from as many parts of the world as possible, and invite you to circulate the petition to your partners.

The deadline for sign-ons is October 15.

SCE: Above petition was also endorsed by SCE on Septmeber 5, 2008: http://www.crin.org/petitions/signatures.asp?petID=1012&offset=40

SCE – August 2008) Shortly after the end of the Summer Olympics in Beijing, Islamic regime of Iran received a Gold Medal granted by Stop Child Executions for earning the shameful rank of highest child executions in the world.

Iran is the only country in the world who has executed children in 2008. Two of the children were executed during the period of summer Olympics even without notifying their attorney and parents. As of now 6 children are known to have been executed in Iran in 2008, 10 in 2007 and 26 since 2005.

The use of the death penalty for crimes committed by people younger than 18 is prohibited under the international human rights laws.

with a collection of videos created by SCE as well as 54 other related clips (favorites) regarding child executions, human rights as well as news clips and interviews featuring SCE president Nazanin Afshin-Jam.

SCE also a multimedia page on its website at :

Nazanin asks rally attendees to wave at a chinese embassy
official who was filming the event from the embassy window.

Ottawa—Diverse groups whose members are suffering oppression in China are rallying together to call for an end to the Chinese regime’s human rights violations as the Olympic Games begin. Members of the Uyghur, Darfurian, Tibetan, Vietnamese, Taiwanese, Burmese, and Falun Gong communities joined Reporters without Borders and leading politicians and activists at a protest in front of the Chinese embassy in Ottawa on August 7.

“We’re gathered here today to show solidarity with the people of China. We stand behind their human rights,” said rally host Nazanin Afshin-Jam, a former Miss World Canada and president and co-founder of the Stop Child Executions organization.

The groups demanded that China honour its promise to respect human rights, a condition upon which it was awarded the Games in 2001.

They also called on the world’s governments to pressure the Chinese regime to live up to its promises. “Those now in Beijing should insist that the host honour its commitments,” said former Secretary of State for Asia-Pacific David Kilgour.

“They should ask for the release of imprisoned Chinese journalists, the remaining Tiananmen prisoners, those jailed for peaceful Olympic criticism, and an end to the persecution of the Falun Gong community,” he said, adding that “human rights across China—already among the most systematically violated — have deteriorated further over the past year.”

‘Their Deeds Mock Their Words’

Included among these were the regime’s crackdown on Tibetans, Falun Gong practitioners and other persecuted groups, the death penalty, suppression of the press and its support for the violent regimes of Darfur, Zimbabwe, Burma, and Nepal.

Mr. Cotler protested the awarding of the games to China seven years ago.

“I said, we should not be rewarding a culture of impunity,” he said. “When the games were awarded, the Chinese government said, we will respect human rights, we will respect media freedom, and as they put it, ‘we will translate these words into deeds.’ Well, seven years later, their deeds mock their words.”

While the speakers decried the awarding of the games to the Chinese regime, many also saw the Olympics as an opportunity to shine a spotlight on its human rights abuses.

“Everything has gone wrong for them and maybe it’s a blessing in disguise. I think now a lot of people are seeing the true state of the Chinese state in China,” said Mr. Kilgour in an interview following the rally.

Mr. Kilgour also condemned China’s forced labour camps in which prisoners of conscience are jailed without trial and forced to work 16-hour days with little food and no pay creating products that range from chopsticks to Christmas decorations.

He particularly noted recent reports that well-known lawyer Gao Zhisheng is suffering torture in Chinese custody. Mr. Gao has strongly and publicly spoken out on behalf of many oppressed groups in China.

“David Matas and I nominated him for the Nobel Peace Prize. He is one the bravest human beings on this earth and he is being tortured, I gather, right now,” said Mr. Kilgour.

Pamela McLennan of the Coalition to Investigate the Persecution of Falun Gong said her organization has published a reporters’ guide to Beijing’s labour camps. It includes directions, contact information, and prisoners’ profiles of some of China’s most infamous labour camps near Olympic venues.

Thousands of Falun Gong practitioners are unlawfully detained in these camps for their spiritual belief, she said.

Kevin McLeod, director of Canadian Friends of Burma, said the military regime in Burma “can’t continue to do their oppression without support of allies like China, Russia, and India.” He called on Canadians and multi-national corporations to know where their investments are going when they invest in regimes like Burma and China.

Kalbinur Semseddin of the Uyghur Canadian Association noted that her people are under the control of China and “there is no human rights, no religious freedom, no chance to learn our own languages.” She urged Canada to help Uyghur-Canadian Huseyin Celil, who has been imprisoned in China since March 2006.

Johannes Sawassi, who is writing a book on Darfur, said that in Darfur the Chinese regime is “arming a certain group in order to get rich from the other group” and “90 per cent are suffering because of your mistreatment.”

“The Chinese communist regime has more than 1,300 missiles pointed at Taiwan,” said Mr. Chen of the Taiwanese-Canadian Association about the regime’s aggression toward Taiwan.

RWB executive director Katherine Borlongan said, “Reporters without Borders has been asking for liberations and we put emphasis on Olympic prisoners…. the journalists, human rights activists and cyber dissidents that are behind bars.”

Beryl Wajsman, president of the Institute for Public Affairs of Montreal, called on Canadians to stand up against oppression and join the “wave of freedom.

”“Words make reality. Actions like this create a new reality… And just as the Wall came down in Berlin, so will all walls come down,” he said.