“The movie paints a realistic image of a society where many are trapped in the sets of religious beliefs, laws and system which in reality are the root causes of their miseries and problems – many self inflicted!”

Shahre Ziba (Beautiful City-2004 ) is an Iranian movie directed by Asghar Farhadi about a young boy in the juvenile prison who plans a birthday party for a friend. But the birthday turns out to be a sad and angry one because it also signifies that his friend, having reached 18, will soon be executed. His friend is sentenced to death for having murdered a girl that he loved in a joint suicide attempt.

After his release on parole, the boy attempts to convince the family of the victim to forgive his friend. In the meantime the boy falls in love with his friend’s sister who still lives in the house of her ex-husband whom she has a child with. The boy and the sister of the juvenile facing execution eventually obtain the pardon of the victim’s father with the condition of paying blood money retribution, a money that they do not have. Victim’s step mother instead asks the boy to marry her physically challenged daughter in exchange for the blood money.

There are a lot of trials and tribulations throughout the movie. The movie paints a realistic image of a society where many are trapped in the sets of religious beliefs, laws and system which in reality are the root causes of their miseries and problems – many self inflicted! Having very limited financial means, the main characters of the movie are caught in an Islamic justice system which is determined by monetary values.

Even the father of the victim is required to pay blood money in order to have the juvenile boy executed , because the boy’s life also has a monetary value twice the value of the life of his daughter (the victim). Trying to have the boy executed, the father of the victim even tries to sell their only home to come up with the money required of him by the law.

At the end, the characters whom represent the lower income and religious segment of the Iranian population , all face making difficult decisions. The father of the victim with the decision to ask (or not) for execution by insisting on blood money. The boy with the decision to sacrifice his life by marrying the physically challenged daughter or face possibility of his friend’s execution. The sister of the juvenile faces the dilemma of accepting the love of his brother’s friend and to face potential execution of his brother or to let him get married to the girl he doesn’t love in order to save her brother.

The movie ends with no good or bad guys. In fact they all seem to be victims of a system and belief that rules them both externally and internally. Even the prison guard is a nice person who cares about the jailed juveniles The local mullah also tries to help but once he fails, he justifies all outcomes based on a belief system that on one hand justifies revenge and on the other promotes mercy and compassion!.

As much as the viewers hope, the film does not end with a closure because the unresolved problems and similar stories are still on-going in the Islamic Republic of Iran …..

There are currently more than 140 juveniles facing execution in Iran. International Laws prohibit child executions. For more information and to sign the petition visit: www.stopchildexecutions.com

http://www.persianhub.org/downloads.php?do=file&id=493
On Oct 31st, the movie ‘The Stoning of Soraya M.’ will be released in America.  This powerful movie which is based on a real story from Iran, was produced through collaboration between Iranian and American writers, producers and talented actors from both countries.  The list of actors and actresses include Jim Caviezel (the actor who played Jesus in the highly successful movie ‘Passion of Christ’ by Mel Gibson), Shohreh Aghdashloo, Parviz Sayyad, Navid Negahban as well as the well known old, Iranian actress Vida Ghahremani and was directed by Iranian Director, Cyrus Nowrasteh.

Mom! Why is execution age so low?

Omid whose cartoons have been featured on SCE before, created this piece titled  ”Behnoud Shojaee : waiting to die”: 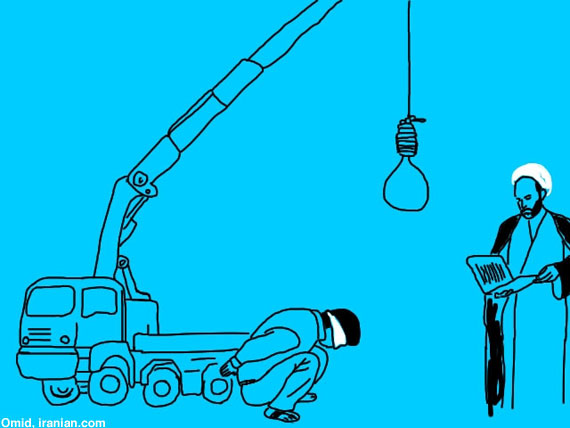 A word of thanks to Stop Child Executions Campaign team members, Donna and Graham Greene for dedicating this video music to SCE Campaign. To read more about Donna visit: ABOUT US This was created in prison by Reza Alinejad, who was sentenced to death at 16. It is his own image behind the prison bars with this word above it in persian : WAITING

Created in prison by Reza Alinejad, sentenced to death at 16.
The word ”JUSTICE” in persian is crossed out.