This was Reza Alinejad’s picture 6 years ago when he was first imprisoned and sentenced to death.

These are his pictures now, the day of his release on December 3rd 2008:

Stop Child Executions would like to thank a wonderful lady in Japan who wishes to remain anonymous for her generous donation of $20 000 towards payment of blood money to the family of the victim.
Stop Child Executions does not directly collect donations for blood money as it can create a bad precedence for other children facing death row; however SCE facilitates connections between individuals and families who cannot afford the payment of blood money which could ultimately lead to the death of their loved ones.

Thank you again to all who helped save Reza Alinejad and those who continue to help support SCE in order to try and abolish the death penalty for children.

Stop Child Executions is happy to announce that Reza Alinejad will not be executed!

Reza was released on Wednesday and greeted into the embrace of his emotional family. The Alinejad family spoke to SCE President Nazanin Afshin-Jam shortly after his release to thank the team for all efforts to help save Reza.  They expressed how overjoyed they are to see Reza home but were also stressed about their new financial debt. They had to mortgage their home and borrow a large sum of  money at a high interest rate to secure the diyeh (blood money) to the family of the victim.The amount cannot be disclosed at this time. Reza maintains his innocence and says that the death  of Esmail Dooroodi  was as a result of defending himself against him and the other attacker Mohammad Firouzi. More details about the attack can be found here: http://scenews.blog.com/4061368/

For more details, photos and video about Reza Alinejad’s release check back here on SCE’s news blog  in the next couple of days http://scenews.blog.com/

Reza’s case was one of the very first files that we at SCE took on after Nazanin Fatehi and Delara Darabi. In her February 2007 speaking tour, Nazanin Afshin-Jam received an email titled “VERY URGENT” from an unknown sender named Ali Alinejad. She was shocked to learn from Ali that his brother Reza had been imprisoned for 5 years and was now facing imminent execution for a murder he claims he committed in self-defense when he was 17 years old. Nazanin had not heard of this case and it was not reported with Amnesty International. She immediately forwarded the message to lawyer Mr. Mostafaei to see if he could help in any way. After reviewing the file, Mr. Mostafaei agreed to take on Reza’s case and he sent Nazanin a letter that he had written to Ayatollah Shahroudi, head of judiciary of the Islamic Republic of Iran, asking for an appeal and re-trial.
Nazanin also wrote a a letter to the Deputy Director of the New York Office of the United Nation High Commissioner for Human Rights, stating her concern about Reza’s imminent sentence of execution which was planned to be carried out within a month. Nazanin was assured by Mr. Craig Mokhiber that the file was directed to the appropriate UN human rights mechanisms for further action. Shortly after, Amnesty International issued an urgent action call to save Reza. Nazanin stayed in direct contact with Reza’s mother, brother and his attorney and reported all updates on the SCE’s website:
http://scenews.blog.com/Reza%20Alinejad/
We at SCE are very happy to see Reza get a second chance at life. We wish to congratulate Reza’s family who worked so hard and also for having signed the SCE petition. Special thanks to the family of the victim for their compassion and to all those who worked hard to obtain Reza’s freedom especially attorney Mohammad Mostafaei for his continuous dedicated hard work.
Also a word of thanks to the SCE team, Supporters and all those who helped bring awareness to Reza Alinejad’s fate.
Another life is saved and we still have many others to help: www.stopchildexecutions.com/scedata.aspx
Sign the petition to stop child executions and get the word out here:
www.stopchildexecutions.com
Source: http://rahai-zan.tv

Disclaimer: As a policy SCE does not collect money for diyeh “blood money”. If anyone wants to help pay for a child on death row’s diyeh, we can try and help connect you. 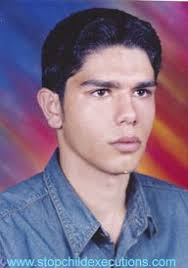 Reza Alinejad’s family had their last mediation with the family of the victim and it was concluded that the Alinejad family would have to pay $100,000 as blood money “diyeh” in order for the officials not to execute Reza.
Their home is worth $50 000 so they are using that as a security deposit. They now need another  $50,000.00. They are currently fundraising in Iran and asking some banks for loans.  They have asked that if anyone can help front some money for them to borrow in order to meet the deadline next week, they would eventually pay them back.

If anyone is interested they can write to info@stopchildexecutions.com and we will put you directly in touch with the Alinejad family.

Reza Alinejad was no more than 17 years old when he defended himself and his friend Hadi Abedini in fight with two other boys that landed him in prison for the last six years in Adel Abad in Shiraz, Iran.

Reza Alinejad and his friend Hadi Abedini were on the sidewalk of Emamzadeh Hassan busy eating when they were reproached by two men Esmail Dooroodi and Mohammad Firouzi.

Insults were exchanged which triggered a fight.

The two men were concealing Nunchucks (martial arts tool) under their clothes and tried to hit Alinejad and his friend.

Alinejad defended himself with a knife in one hand while protecting his face with the other hand. Without intending to kill Dooroodi, his knife cut his neck which ended up being fatal.

For more background information about Reza Alinejad, check our archive at
http://scenews.blog.com/reza%20alinejad/

Months ago, Iran’s head of judiciary, Ayatollah Shahrudi came to the decision that Reza Alinejad’s case should be resolved through the

mediation council between Reza’s family and that of the victim. The initial 2 billion Rials (more than 200,000 dollars) requested in blood money retribution by the family of the victim was too much for the Alinejad family to afford. More negotiations are taking place on the final blood money price. If the Alinejad family does not produce the amount requested soon and the Justice department does not grant a stay of execution. Below Reza’s lawyer, Mohammad Mostafaei says that Reza Alinejad   will be executed very soon. Mr. Mostafaei explains how there is enough evidence and holes in the case that requires a re-trial.

To help save Reza and other minors facing executions visit:

Reza Alinejad was no more than 17 years old when he defended himself and his friend Hadi Abedini in fight with two other boys that landed him in prison for the last six years in Adel Abad in Shiraz, Iran.

With the permission of the Head of Judiciary Ayatollah Shahroudi, he may soon join the ranks of

At 8:30 pm 5/10/ 1381(Persian Calendar) Reza Alinejad and his friend Hadi Abedini were on the sidewalk of Emamzadeh Hassan busy eating when they were reproached by two men Esmail Dooroodi and Mohammad Firouzi.

Insults were exchanged which triggered a fight.

The two men were concealing Nunchucks (martial arts tool) under their clothes and tried to hit Alinejad and his friend.

Alinejad defended himself with a knife in one hand while protecting his face with the other hand. Without intending to kill Dooroodi, his knife cut his neck which ended up being fatal.

A lot of Investigation was done to reveal the facts.

2)       Mr. Gholam Hossein-Chehrenegar who was a witness attested to the fact that there is no doubt that Reza Alinejad did not intentionally kill the man. Rather it was because of self defence that the other man was killed.

3)       These testimonies reveal that this was in fact self defence and the fact that the accused had to intention of killing anyone.  Despite Alinejad being only 17 years old when this incidence happened, Court #6 in the city of Fasa convicted him on charges of murder.

The lawyer asked for a retrial and the file was sent to the court of appeal in the same city.

“There was no animosity between the fighting parties prior to this incident. The initiator of the fight was the deceased and his friend Abedini who used nunchucks to attack Reza Alinejad and his friend and ended up injuring Alinejad’s forehead. It was a very dangerous piece of equipment that was used. Reza Alinejad claims that he defended himself by throwing a kitchen knife and accidentally stroked the neck of the deceased which caused his death. Therefore because Reza Alinejad defended and ended up killing a man, it is right for him to be executed”.

This above verdict was cancelled and the file was sent anew to a different branch for further investigation.

4)       The file was sent to branch 101 of criminal court in Fasa city. This branch concluded that because the accused could have run away from the scene, they reaffirmed the execution once again.

This goes against the earlier witness’ testimony that Reza Alinejad and Hadi Abedini could have not fled the scene as they had been surrounded.

In any case, based on Reza Alinejad’s protest that he is innocent, the file was sent to the Supreme Court. Without taking into consideration the facts in the file, the judges issued the verdict of execution once again for Reza Alinejad.

After the death sentence verdict, the file was sent in order for the execution to be carried out.

According to article 205 of the Penal code in Iran, it is required for the execution order to be approved by the Head of Judiciary. A few days ago the Judiciary Head approved Reza Alinejad’s execution which has put him in an imminent situation to be executed. If the Head of Judiciary does not stop this execution due to the facts aforementioned, or if the family of the victim does not give their pardon, Reza will soon be sent to be executed. Iran has the highest number of executions for those under the age of 18.

Please note that the 2 billion Rials blood money retribution requested for Reza Alinejad converts to more than $200,000 dollars and not as originally reported as 2 million dollars.

A word of thanks to Nazanin Afshin-Jam for catching the error and sorry for the mistake in conversion and the inconvenience.

To SCE Team and supporters: Please correct this in your posts in other sites too. Thank you.

Following last month’s order of Iran’s head of judiciary, Ayatollah Shahrudi, to have the case of Reza Alinejad resolved through the

mediation council, the family of the victim demanded 2 billion Rials (more than 200,000 dollars) blood money retribution. Alinejad’s family not being able to afford such demand , the file was sent back to office of Ayatollah Shahrudi for final approval of execution decree.
Meanwhile Mohammad Mostafaei , Reza’s attorney told ISNA (Iranian Student News Agency) that Iran’s supreme court has agreed to review the case based on the evidences presented by Mostafaei.
To read more about Reza Alinejad visit: https://www.stopchildexecutions.com/Reza.aspx  and http://scenews.blog.com/Reza+Alinejad/

To help save Reza and other minors facing executions visit: https://www.stopchildexecutions.com/how-you-can-help.aspx