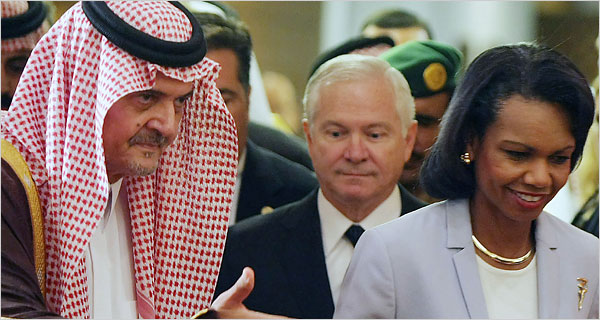 Last month Saudi Arabia in violation to its international obligations publically executed a child (Dhahian Rakan al-Sibai’i ) by beheading for a murder that he allegedly committed at the age of 15.

Sadly, not only were there not much official international government objections to this inhumane and illegal execution, but shortly after the execution the US adminstration asked the US Congress to approve an arms-sale package to Saudi Arabia and five other Persian Gulf countries that may total more than $20 billion, which happens to be the largest arms deal negotiated by the Bush administration. Last week also US Secretary of State Condoleezza Rice with Defense Secretary Robert Gates met with King Abdullah and other Saudi officials in the Red Sea port of Jeddah. 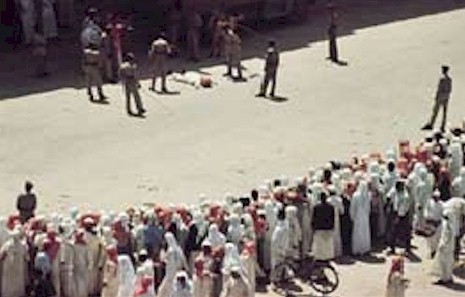 Saudi Arabia uses public beheading as the punishment for murder, rape, drug trafficking, sodomy, armed robbery, apostasy and certain other offences.  Forty five men and 2 women were beheaded in 2002, a further 52 men and 1 woman in 2003 and 35 men and a woman in 2004.  Executions rose in 2005 with 88 men and 2 women being beheaded and then reduced to 35 men and four women in 2006.
The condemned of both sexes are given tranquillisers and then taken by police van to a public square or a car park after midday prayers. Their eyes are covered and they are blindfolded. The police clear the square of traffic and a sheet of blue plastic sheet about 16 feet square is laid out on the ground.
Dressed in their own clothes, barefoot, with shackled feet and hands cuffed behind their back, the prisoner is led by a police officer to the centre of the sheet where they are made to kneel facing Mecca . An Interior Ministry official reads out the prisoner’s name and crime to the crowd.
Saudi Arabia uses a traditional Arab scimitar which is 1000-1100 mm long. The executioner is handed the sword by a policeman and raises the gleaming scimitar, often swinging it two or three times in the air to warm up his arm muscles, before approaching the prisoner from behind and jabbing him in the back with the tip of the blade, causing the person to raise their head. Then with a single swing of the sword the prisoner is decapitated.

Normally it takes just one swing of the sword to sever the head, often sending it flying some two or three feet. Paramedics bring the head to a doctor, who uses a gloved hand to stop the fountain of blood spurting from the neck. The doctor sews the head back on, and the body is wrapped in the blue plastic sheet and taken away in an ambulance. Burial takes place in an unmarked grave in the prison cemetery.
Beheadings of women did not start until the early 1990’s, previously they were shot.  Forty women have been publicly beheaded up to the end of 2006.  Most executions take place in the three major cities of Riyadh , Jeddah and Dahran. Saudi executioners take great pride in their work and the post tends to be handed down from one generation to the next.