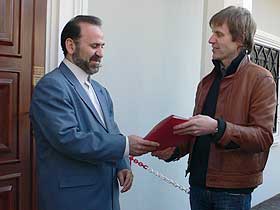 Yesterday, Dagbladet newspaper from Norway with about 800,000 daily readers published a detailed article about Delara Darabi and child executions in Iran. The article explained how myspace has been used by human rights activists to save Nazanin Fatehi and Delara. The Norwegian newspaper has published the address of Delara’s myspace site which has resulted in substantial number of friend requests from Norway on Delara’s myspace page since yesterday. As a result many newspaper readers have been signing both Delara’s petition and stop child executions petitions in the past two days.

The newspaper wrote that Amnesty International has been working for Delara’s case. On Monday John Peder Egenæs, general secretary of Amnesty International Norway, together with soccer players Freddy Dos Santos and Tommy Berntsen, delivered a collection of signatures to the consulate General of the Islamic Republic of Iran, Ali Kazemi. He claimed that Delara Darabi will not be executed. “I know nothing about this case, but it is not correct that she will be executed,” said Kazemi when he received the signatures.

Mr. Egenæs of Amnesty International does not believe this claim: “They must be giving out false information to make themselves look better, because this case has received so much attention”.

He believes the campaign will help: “Iran is under so much pressure now, and is being embarrassed in so many areas, that if we can focus on single cases like this, there’s a good chance we will succeed. I am an optimist.” He said. 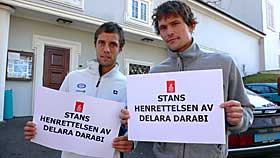 The Swedish newpaper Expressen has published an article about Stop Child Execution Campaign which resulted in additional signatures from Sweden. The new petition has already passed 1000 signtaure mark .

A word of thanks to Dagbladet newspaper , Peder Egenæs, general secretary of Amnesty International Norway, Norwegian soccer players: Freddy Dos Santos and Tommy Berntsen, Kristian Hvesser of Stop Child Execution Team and all other new friends of Delara Darabi and SCE campaign from Norway, as well as Expressen and all the Swedish supporters.